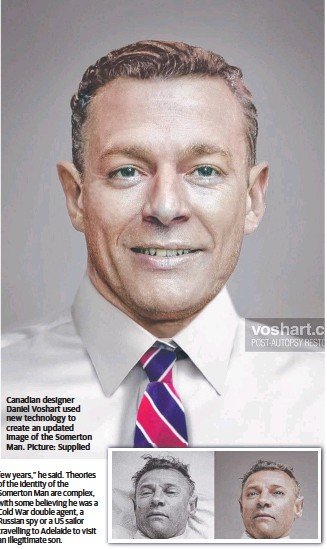 An 11-year-old boy is walking on the beach with his Dog Dandy, Dandy finds this man and urinates on him a man. He thought that he was sleeping but when he got closer he realized he was not. He ran home and told his mom he saw a dead body and his mom called the cops. On the Somerton beach, a man is dressed immaculately in suit shoes was shined.

And his head was leaning against the wall. . The suspected cause of death was heart failure but thought it would be poisoning however an autopsy ruled out both. The last thing he had eaten was a pasty which I think has to be an Australian way of saying Pastry. No wallet no ID all nametags on the clothing are snipped off. Fingerprints were unfound this guy was off the grid. It was on the news and people came and saw the body and no one could confirm who he was 4 months later they find a sewen in the pocket like a secret pocket and this piece of paper is from what they think is a book called the Rubia and this book apparently is rare. The printed words on it say Tama Shud which is Hebrew for it is ended. They thought okay maybe this could be a suicide But who would kill themselves with an untraceable poison and have this note in a secret part of their pants?

Now they are looking for this book but they can’t find it they do bury him they do embalm him so they can have something on for this case.

8 months later of when the body is found a man walks into the police station with a copy of the Rubiat. His story is he claims he found a book in his car at Somerton beach but at the time he thought nothing of it until he heard about the search for this man in a newspaper. The book has part of the page torn out and it is the same part of the page as that was found with this man. This came from this specific book. They look at the book and there is this phone number in it as well as some strange code that has never been cracked.

The number leads them to this woman named Jessica Thomson who lives nearby. When they interview her she is very evasive and apparently, she was crying and hyperventilation the whole time having a panic attack. She did say she gave the book to a man named Alfred Boxolt he does have a copy of the Rubiot. Later they find out that Jessica has a son and this son had very similar dental and ear similarities to this man.

He was a spy and someone took him out

Jessica Thomson knew this man and then they got into an altercation and she used ricin or something. gf,,.


Just as of the 22th of August they have dug him up and they are taking the remains and testing them for DNA. 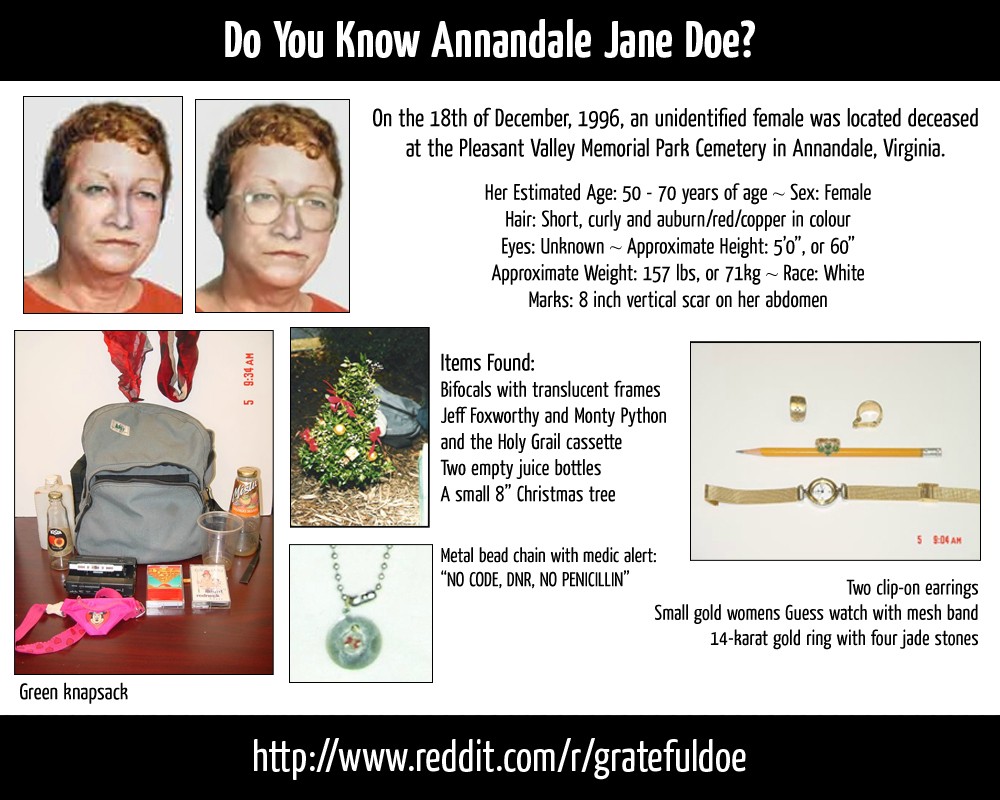 Nothing gets to me more than a John or Jane Doe. Being gone without anyone even knowing what happened. Regardless of if you had no family, or they just think your missing it is always upsetting to me to lay to rest those who are nameless. This case is where we look for theories on what happened to this Jane Doe, at Christmas time.

It was December 18 of 1996, in the Pleasant Valley Memorial Park (A cemetery) in Annadale Virginia. Our Jane Doe went to where the babies and children are buried. She then proceeded to set up a small Christmas tree, before mysteriously taking her own life, leaving behind no identification or real clues to who she was.

This leaves so many questions, why in that cemetery? Why would she commit Suicide? Why go through the trouble to set up a Christmas Tree? And why would she want to be a Jane Doe? Lets get on to the only few clues we have.

Jane was found by a groundskeeper who worked there at Pleasant Valley Memorial. She was laying on a clear plastic sheet on the ground. Why would she have laid down the sheet? Was she trying to provide an easy cleanup for her own remains?

Her cause of death was suffocation, as she had taped a plastic bag around her own head… or so we assume. Technically, nothing I read reported any chance or murder, but could it be a possibility? An elaborate murder made to look like a suicide. Perhaps they have more evidence that wasn’t released, but are we positive this was really a suicide and not a murder?

She was wearing headphones, playing cassette tapes of comedians. Was this to lighten her last moments? Help her be content in her last moments? Does this point more to an actual suicide or was it a distraction? It was also found that she had consumed brandy and taken Valium before her death. Once again does this further point to suicide to calm nerves, or point to murder because they were making her less likely to fight back.

There was a scar on the abdomen, which is possibly a C-section scar. Could this be related to why she was in the children’s section of the cemetery, could she have had a child buried in there? She was wearing clothes from upscale department stores, and had a medical alert bracelet that read “No Cod, DNR, No Penicillin.” So, this points to the fact that she probably wasn’t homeless, means she had something, how did that go unnoticed? Why weren’t they able to track the medical bracelet, I feel like that should provide information? Is it different now than it was in the 90’s?

Besides the tree and the cassette her possessions included: a knapsack with a cassette tape of “You might be a redneck” as well as a tape of Monty Python and the holy grail… two empty juice bottles, a red scarf, a newly purchased roll of masking tape, two envelopes… one labeled cemetery and one labeled coroner, and a child sized pink mini mouse fannie pack that had been well worn and was mended with safety pins. She obviously liked comedy, was this because her own life seemed so dull or upsetting that she the tapes were her attempt to brighten her life? Was the masking tape purchased by her? Was the fannie pack something of a deceased child?

Inside each envelope was a 50 dollar bill and a note reading. “Deceased by own hand… prefer no autopsy. Please order cremation with funds provided. Thank you, Jane Doe.” Why, why would you sign your name Jane Doe? Also, in the envelope was a poem, written by a typewriter. It read: “Now I lay me down to sleep. So to drift the eternal sleep. And though I die and shall not wake. Sleep sweeter will be than this life I forsake.” OMG, who was she, what was going on in her life??? Why was this the only route for her, and why didn’t she want people to know who she was???

Estimates state that she was between 50 and 70 years old, five feet tall and about 157 lbs. She had curly copper red hair and their were no vehicles at the cemetery. How did she get there with all that stuff? Was she dropped off? Took a bus? Walked? How local was she?

Theories: If you google her as a Jane Doe and the cemetery she was found in an article from find a grave comes up for one Brandi Rae Ballard, who died at 9 years old December 18 1989 at a hospital. I can’t find more cause of death than that. She was buried there in that cemetery. According to the sit it says she was survived by: Her mother (Carmen Ballard) two sisters, one brother, and her grandparents. So we have to wonder, was this woman Carmen Ballard, mother to this small girl who had died seven years earlier? Also, it doesn’t mention her father surviving her, had he also passed away? If this Jane Doe is Carmen what about the other siblings it says are still alive, how would the not claim her?

Another reddit theory is Carmella Maria Gutierrez who went missing from Chattanooga, Tennessee in January of 1990. Date of birth is 3/19/1943 so the woman would now be 77. Had an appendectomy and a hysterectomy which would explain the scar… however what was she doing for six years and how did she end up there?

I personally go more with Carmen Ballard, due to the possibility of a child buried there on the same date, it explains more to me… however it is still a mystery as to why no one ever claimed the woman.