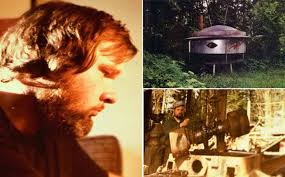 Granger was a talented mechanic, who dropped out of high school early but was able to build a one-cylinder automobile at just 14.

Here’s a guy who was, by all accounts, a mechanical genius; he hauled an old train out of the forest to restore it, rebuilt a World War II aircraft, and even made his own spaceship. To top it off, he supposedly believed he could communicate with aliens.

His most memorable project was constructing a UFO-like shelter from two satellite dishes that he fitted with furniture, a TV, and a stove.

left a note for his parents to find. It said that he had gone to board an alien spaceship after recurring dreams had told him he was going to embark on a 42-month, interstellar journey.

That night, Granger Taylor vanished. Both his family and the police spent months searching for him, but no one could uncover any leads on where Granger could be.

In March 1986, local forestry workers found a blown-out vehicle somewhere near B.C.’s Mount Prevost, not far from the Taylor family home. Granger was familiar with dynamite and some had gone missing from his parents’ property the night he disappeared.

In 1986, five-and-a-half-years after the disappearance said two pieces of bone that could have been Granger Taylor’s, and parts of what was believed to be his truck had been found in a dynamite blast site on Mount Prevost. People did call police reporting a weird noise this could either be from a possible UFO or the dynamite blast?

The police were called, and they were able to confirm that the vehicle identification number on the wreckage matched that of Taylor’s Datsun pickup. Bone fragments and a piece of Taylor’s shirt were also found at the scene.

Was he abducted by aliens and taken to space? Did delusions cause Taylor to blow himself up that night? Was it all an elaborate hoax that Taylor created so he could disappear and start a new life? Was he recruited by a secret spy agency? Or, did he die by suicide, masking his intentions with a suspicious note to ease the burden on his family?

There are also theories that he was taken by the Columbia government or even the US government that he knew too much about aliens.

Jim and Grace, have since died, and the farm is now owned by Taylor’s sister, Grace Reynolds. It was on this same property that Taylor built the object most often associated with this story — a “spaceship” constructed from two satellite dishes. His interest in space travel was piqued when Star Wars arrived in 1977, and construction of his UFO-like fortress — complete with a wood stove and bed — began soon after.

Keller, now 53, helped Taylor build the spaceship, and maintains that his friend was anything but suicidal. “Granger was the most intelligent, down-to-earth, wise man that I’ve ever met in my life,” said Keller, who, with his family, was among the last to see Taylor alive.

Taylor’s mental health had reportedly declined in the months leading to his disappearance, and according to a Vice magazine article written in 2016, he was taking LSD regularly before he vanished.

It’s for that reason that some members of the Taylor family who participated in the documentary have given up hope he will ever be found. “Let’s set the record — Granger’s gone. He’s dead,” half-brother Joseph Taylor says in the film.

Bone fragments have not been tested recently for DNA testing.