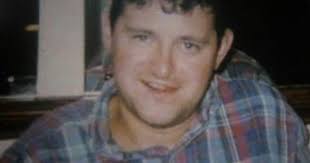 Paul McGrath or also known Maggie was stabbed to death on April 7 1997 He was 34.

He was attacked and stabbed 18 times in the hallway of his own home.

7:30 AM workes working around the home spotted Paul and notified police

He dropped out of school when he was 16 and started working full time shortly after that he met his girlfriend until he died.

On the evening of April 6th 1997 Paul had been visiting local pubs with friends, including the Stamford Arms in Denton Road, Audenshaw, the Dog and Partridge in Ashton Road, Denton, and the Silver Springs pub in the town.

He had bumped into his dad at this local pub.

The next morning, someone was pounding on his door he woke up, turned the burglar alarm off and aswered the door. He was then stabbed to death 18 times. It is beleived two men stabbed him.

There is no motive to kill Paul whatsoever. What we think is that he had a friend to whom he was very loyal who was in a family dispute – a vendetta that got out of hand – it had nothing at all to do with Paul.”- local detective

He alleged that John Andrews, 54, and Michael White, 29, had killed Paul. Both denied murder.

Mr Bentham claimed that a dispute between Mr Andrews and another man lay at the heart of the matter.

Mr Andrews lived with his wife, and lodger, Mr White, in Denton, a mile away from where the man he was in dispute with lived in Holland Street, Denton, a few doors away from his friend, Mr McGrath.

He said Mr Andrews did not approve of the man.

It was claimed in court that matters came to a head when a group including Mr Andrews and Mr White were entering a club at the same time as a party including the man were leaving.

Mr Bentham told the court: “Fuelled by alcohol and hatred they resolved to do something about it.”

Mr Bentham claimed a tiny fragment of the kitchen knife used in the murder was found at the scene. It matched a set found at Mr Andrews’ home.

He also claimed that footprints at the scene matched those of trainers being worn by Andrews and White.

However a jury cleared Mr White and Mr Andrews of murder.

Gillian said the jury returned its verdict after half an hour of deliberation.

Several weeks before Paul’s murder another friend of the man that Mr Andrews was in dispute with was attacked with a snooker ball placed in a sock, but the incident was never formally reported to police.

Mr Bottomley said: “There are people who know exactly what has happened. Those responsible will have told family, and friends – and they need to search their consciences.

Hoping forensic evidence can tie this case together

There was an ongoing dispute between his father and another man that this might of been the reason for his death. The police and family both know what this dispute is but they will not say