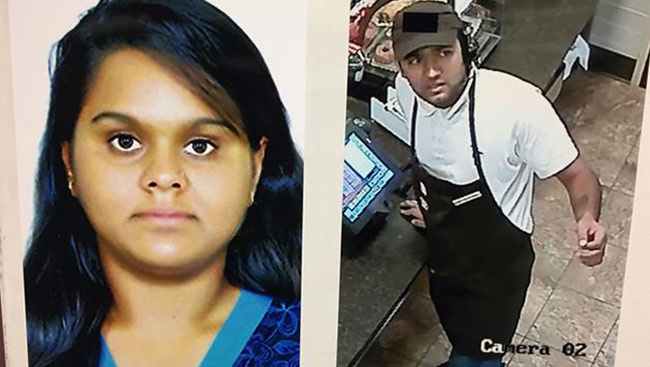 Pallic wanted to go home she missed her family

Barush decided to move in with his family in New Jersey

They were in an arranged marriage

When the officer arrived he found Palak in the back of the shop it was obvious that she had been murdered. She had been beaten and stabbed multiple times.

Police say Palak’s killer is unmasked — and it’s her husband.

“She never returns, so basically you see him follow her to the murder scene and then you see him leave, and that’s the last time she’s ever seen alive,”

Police say Palak made a call home to her mother in India just minutes before her murder. Cops claim that may have enraged her husband, and been the reason he grabbed her phone and headed to the back room.

“One investigator spoke with her family members, her mom, her aunt,” said Davis. “She was on the phone with a family member, expressing her need and want to come home, moments before the murder took place.”

Police say the time of attack on the surveillance video reads 9:32 p.m. The patrol officer didn’t find Palak until around 10 that night and did not identify the victim as Palak, and the suspect as her husband, until about 30 minutes later. That gave Patel more than an hour to get away.

According to police, a taxi driver says he drove Bhadreshkumar Patel nearly 200 miles to a hotel near the airport in Newark, New Jersey.

Images of Patel are taken by a surveillance camera in Newark. They’re clicked at a hotel counter after he reportedly paid cash for a room. According to investigators, he checked out the following morning, hitched a ride on the hotel’s courtesy van to Newark’s Penn Station to catch a train, and then he vanished.

As soon as the alleged fugitive crossed state lines, cops jumped at the chance to call in the FBI. The FBI promptly put Patel on the No-Fly List and launched a publicity campaign to catch the alleged killer at large. They even put up a billboard in Times Square in New York City.

Investigators believe Patel came back to his apartment near the Dunkin’ Donuts and got his passport, issued in India. A cab driver told authorities she picked him up near the shop and drove him to Newark, New Jersey, to a hotel near Newark International Airport.

The FBI, however, doesn’t believe Patel would have been able to board a flight.

“If this person shows up, they’re not going to get on a flight. We have an active federal arrest warrant. They’ll be placed in custody,” FBI Special Agent Steve Vogt told the station.

Investigators say a surveillance camera captured Patel at Penn Station in Newark, but the trail has gone cold. Patel had a previously listed address in New Jersey, according to the station.

He was born in India and was in the U.S. legally, but his visa expired in March 2015, according to the FBI.