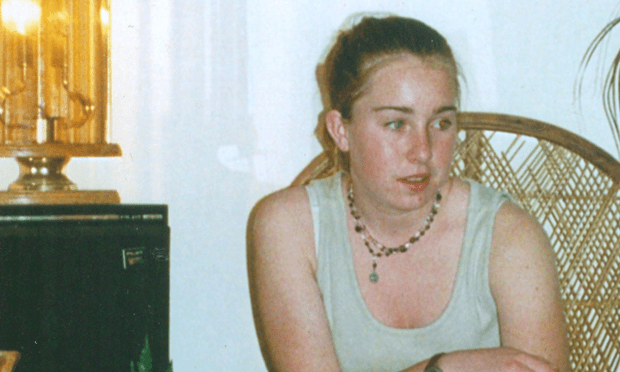 Was just 5 days shy of turning 17 from Eureka when she disappeared. She was known as an Alternative kid who liked REM and smashing pumpkins, she made her own hemp necklaces. She was last seen at her aunt’s shoe shop which was a shop for Dragqueens she left that shop that day, and was never seen again. Then she went to a daycare where she had a job interview. Robert Durst was also known for hanging around this same exact shop. He was also confirmed to be there the same day Karen went missing. This sketch was drawn of someone who said they saw Karen get into a car with a man that looked a lot like Robert Durst.

Annie Casper, Karen’s aunt, was her legal guardian and owned a shoe store inside Bayshore Mall. The shopping center was in the 3300 block of Broadway Street, approximately one mile from Karen’s place of employment. She briefly visited her aunt’s business before departing from the mall at approximately 2:45 p.m.

A witness stated that Karen may have entered an unidentified light blue four-door 1976 to 1978 sedan, which was possibly a Ford Grenada, a Mercury Monarch, or a Nissan. The vehicle had California license plates and “Eureka” imprinted on the rear plate’s frame.

When she didn’t arrive home that night her mom called her aunt and her aunt said she never came back she told her that she was going to this job interview and then going to go home.

Her mom drove everywhere and put up posters within a few hours of her disappearance from LA to Eureka which is 650 miles. The police of course told her she had. to wait 48 hours before they would get involved.

Mary Casper her mom said she had been acting out lately and that even her aunt out in Eureka offered to take her for a while to help have things cool off at home. So She gave her sister Annie Casper guardian rights to karen.

She had savings in her bank account that was never touched. She also had a plane ticket that she got for a gift for Christmas that was also never touched. This was to go to other schools in California for college.

Mary her mom ended up staying in Eureka for 6 months looking for any sign of her daughter. There was dog searches, groups of people trying to find her.

Trinidad and Eureka are both in Humboldt County, a part of California known as a stronghold of the marijuana production industry. The region is filled with redwoods and greenery and beaches of light-colored sand punctuated by dark, jagged rocks. It is famously liberal, attracting itinerants and Vietnam veterans and sundry sorts of dissenters from the American mainstream since the tumultuous 1960s. A common nickname for the area is the “lost coast”.

The area is known as a place to hide – the novelist Denis Johnson once wrote of these towns that they were “places a person could disappear into” – and undoubtedly that was part of what attracted Durst here. He has often professed his love for marijuana.

Durst owned an office in Eureka for 15 years with the Real Estate business he inherited.

in to say that they’d been asked for money by a girl answering Karen’s description in Tempe, Arizona.

So the family went to Tempe. It was the summer of 2001. They stayed at a motel, and they went out and talked to the large transient population that was then in that city. They told the motel manager why they were there. They showed Karen’s picture everywhere. They interviewed local kids, who did say they’d seen someone who looked like her.

And then one day while they were out, Mary said, “we got a phone call from the motel manager, and he says: ‘I think Karen’s here.’” They rushed back to the hotel. “I couldn’t breathe the whole time,” Mary said. James said he was “almost fainting”.

The hotel manager insisted they call the police. When they came, the officers were the ones who knocked on the door of the motel room while Mary and James waited in the parking lot. They saw the door open; they saw the police officers talking with someone inside. And then the girl stepped out. It wasn’t Karen.

“She walked by right everybody and she walked right up to me and said: ‘I’m so sorry,’” Mary said. And then, the girl who wasn’t Karen hugged her.

she is a victim of sex trafficking

One suspect is Robert Durst Mary has gone as far as to write Durst and ask him for any information on his daughter’s whereabouts.