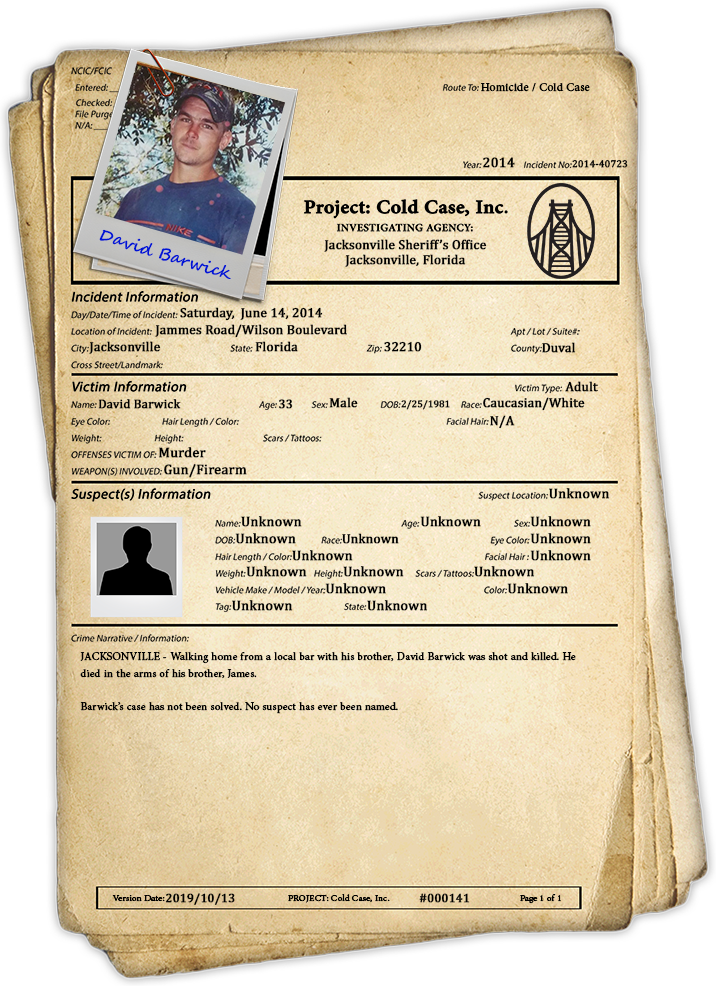 On June 13, 2014, David Barwick died in his brother’s arms after being shot while walking down the street in Jacksonville, Florida. David and his brother were walking home from Judy’s Pub on the west side of town when the shooting occurred.

David Barwick would do anything for another person. “He would help you out, but the second he needed help, he wouldn’t ask or expect anything in return,” his sister Melissa Babcock said. She described her brother, lovingly, as “the hard-headed kind.”

Barwick doesn’t have an opportunity to ask for help anymore, but help is exactly what his family needs now.

On June 13, 2014, David Barwick and his brother James spent a few hours at Judy’s Pub on the westside of Jacksonville, Florida. At 2:00 the following morning, the brothers left the bar on foot to head home.

Roughly a mile down the road, David was shot multiple times, per the family. James held his younger brother as they waited for help, but David would pass away in his arms.

Babcock remembers her brother David fondly. “We made memories everywhere we went,” she recalls, with a smile.

David Barwick walked his sister Melissa down the aisle at her wedding. (image via Melissa Babcock)

The Barwick children spent their childhoods collecting experiences and creating lasting memories with their family. Babcock shares story after story of the retreats to Suwannee Springs, sibling competitions like swimming races, camping out in nature, and certainly, lots of laughter. Babcock nurtures those same traditions with her own children with yearly trips back to Suwannee during the summers.

David “loved to laugh, be around friends, cook out, sit around a fire with friends and family,” Babcock says of her brother. “He loved his family.”

David walked his sister Melissa down the aisle for her wedding and was present when her first child was born. “My son just turned 19 and David should’ve been here to celebrate with us. David was there when he was born!” Melissa said.

Time since David’s death has been difficult, especially as the family recently hit the five-year mark with no resolution. His two boys and their grandmother celebrate his birthday with a balloon release each year.

For Melissa, she reflects on her childhood for comfort. Remembering the times when she and her brothers would enjoy the luxuries their grandparents offered, showering the kids with food and love. David loved his grandmother’s cooking so much, he would often be found at her table.

While the Barwick family looks to law enforcement for answers, they have a hard time understanding why such tragedy happened to their family. “It doesn’t begin to make sense,” Babcock said. She shares her multiple attempts to get answers only to be met with silence. She works diligently to ensure that her brother’s case will be solved.

She hopes to one day bring some sort of peace to the family. “Our father is dying,” Melissa said. “I want to bring him peace of mind so bad, but I can’t,” she cried.

“I miss his smile, his jokes, his laughter – everything. He was just a good person,” Babcock said.

If you have any information on the unsolved murder of David Barwick, please call the Jacksonville Sheriff’s Office at (904) 630-0500. To remain anonymous and possibly be eligible for a $3,000 reward, call First Coast Crime Stoppers at (866) 845-TIPS.