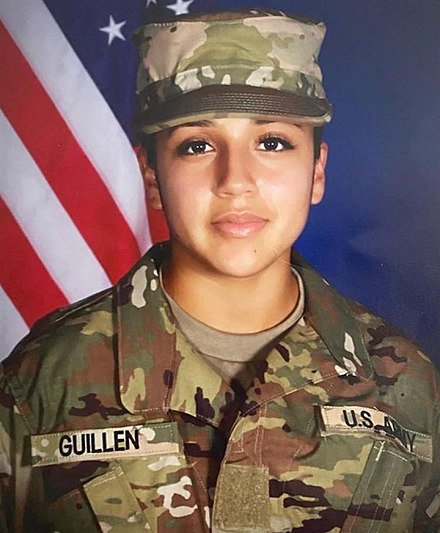 The murder of Vanessa Guillén, a 20-year-old United States Army soldier, took place inside an armory at Fort Hood, Texas, on April 22, 2020, when she was bludgeoned to death by another soldier, Aaron David Robinson. The fort Hood soldier vanessa Guillén had been missing for over two months when some of her dismembered remains were found buried along the Leon River on June 30.Upon hearing about the discovery, Robinson fled Fort Hood and fatally shot himself when law enforcement attempted to apprehend him in nearby Killeen, Texas.

Cecily Aguilar, a local woman identified by authorities as Robinson’s girlfriend, was taken into custody and is alleged to have assisted him in dismembering and burying Guillén’s body. On July 2, 2020, Aguilar was charged with one federal count of conspiracy to tamper with evidence. In Fort Hood On July 13, 2021, she was indicted on eleven counts by a federal grand jury.

Guillén was stationed at Fort Hood, a U.S. Army installation in Bell County, Texas, which is approximately 340 square miles (880 km2) in size and home to III Corps and the First Cavalry Division. She was last seen around 1:00 p.m. on April 22, 2020, in the parking lot of her unit, the Regimental Engineer Squadron Headquarters of the 3rd Cavalry Regiment (3CR). Her car keys, identification card, bank card, and barracks key were found inside the armory where she worked. Guillén’s family felt she disappeared under suspicious circumstances. The case was investigated under the jurisdiction of the U.S. Army Criminal Investigation Command (CID) and the Federal Bureau of Investigation (FBI) with local law enforcement agencies in Bell County, Killeen, and Belton; the Texas Parks and Wildlife Department; the United States Marshals Service; and the Texas Ranger Division in support. Multiple Fort Hood units, including 3CR, began searching the area within two weeks of her disappearance.

Before Guillén went missing, she had told her family that she was being sexually harassed by an unnamed sergeant at Fort Hood, and that complaints by other female soldiers made against the sergeant had been dismissed. Guillén’s mother advised her to report the matter, but she responded that “she could put a stop to it herself” out of fear that her mother would be harmed for making a report. In early June, Guillén’s mother told reporters she did not trust the Army’s handling of the investigation and her attorney, Natalie Khawam,said she believed the family was “being kept in the dark” because few details had been released regarding the disappearance. On June 13, 2020, hundreds of people assembled at the gates of Fort Hood to protest what organizers felt was a lack of information on the case. CID reported that they found no evidence that Guillén was assaulted, but said investigators believed foul play was involved in her disappearance.

On June 30, 2020, Army investigators were called in when contractors discovered partial human remains along the Leon River in Belton. The area had previously been searched by Texas Rangers, detectives, and cadaver dogs on June 20 after a burn mound was discovered nearby. Investigators theorized that the remains, previously buried under concrete, had been dug up by wildlife.Tim Miller, Director of Texas EquuSearch, stated that it was the most sophisticated burial site he had ever seen.

Later that evening, at around 8:30 p.m., authorities re-interviewed Cecily Anne Aguilar, a local woman who was the estranged wife of a soldier at Fort Hood. Aguilar was reported to be the girlfriend of Aaron David Robinson, a specialist ranked enlisted soldier who was one of the last known people to see Guillén on the day of her disappearance and who had previously been interviewed by investigators. Aguilar told police that Robinson had confessed to her that he had killed a female soldier at Fort Hood. At the request of law enforcement, Aguilar placed a controlled telephone call to Robinson, who said, “Baby, they found pieces”, and texted Aguilar multiple news articles, to which he never denied anything in response. According to a criminal complaint filed in the Western District Court of Texas, Aguilar allegedly helped Robinson dismember and dispose of Guillén’s body on April 22, 2020, after Robinson told her he had bludgeoned Guillén to death with a hammer inside the armory.

On the evening of June 30, Robinson escaped the custody of an unarmed guard from his unit and fled Fort Hood after hearing the news of the discovery of remains. He had been detained by his unit at the request of a CID agent under the pretense of violating COVID-19 quarantine rules. In the early hours of July 1, Killeen police located and attempted to make contact with Robinson, who produced a handgun and killed himself before he could be taken into custody.

Aguilar was arrested by Texas Rangers and held at the Bell County Jail. On July 2, Bell County officials stated Aguilar would be transferred to federal custody due to being charged with one count of conspiracy to tamper with evidence by the United States Attorney’s Office Western District of Texas. Assistant United States Attorneys Mark Frazier and Greg Gloff are prosecuting the case on behalf of the federal government.

On May 24, 2022 the Texas Department of Public Safety released a report stating that “Aguilar later explained why Robinson killed Guillen, saying Guillen saw Robinson’s cellphone lock screen, which contained a picture of Aguilar. (Robinson) told her he was worried about getting in trouble for violating the Fort Hood Army’s fraternization rules since Aguilar was still married to another soldier and he hit Guillen in the head with a hammer.”

Her parent fought for a memorial for her. Plus I am Vanessa Guillen is going to air on Netflix November 17, 2022

‘I Am Vanessa Guillen’ Documentary About U.S. Army Soldier Who Was Murdered in 2020 Heads to Netflix on November 17, 2022 – About Netflix

2:04 pm, Lauren’s mother gets a phone call from, Lauren desperately wants to talk to everyone, her father, her children, she wants to tell them all she is sorry. Statement from TrueCrimeSociety.com

Something about sinking into quicksand in the call. Muddy, marshes???

At 2:24pm, there is a 911 call from her, that lasts 20-22 minutes… sadly since it is key evidence they haven’t released the whole call, however the claimed she is being chased, shot at and is very startled. No, gunshots were actually heard by the police. She gasps at the end, but her phone eventually dies. The area her phone last pings is very vast.

They do find her car in a ditch, it is possible due to some paint transfer that she could have been run off the road.

There are three people who have admitted to being with Lauren on the day she went missing. One of which claimed they had been fishing, and that he had been with her when the car went into the ditch. He claims he was going to go get help for the car and she ran into the woods…. and when he was found he was indeed at his house getting chains and his vehicle.

One of the people who claims to have been with her that day, has since passed away.

Many searches of the woods have been done, one of her shoes has been found, but nothing else that has been released. However, the area was also heavily flooded at that time which made it somewhat more difficult. They don’t know if she is still there in that area, or made it to a road and and got out.

Technically no physical proof of foul play, however most think she wouldn’t abandon her children.

Theories: she was on meth, and ran off into the woods delusional and died somewhere they haven’t yet found. That she owed someone money and so she staged her own disappearance. Questions as to why the person who went for help would leave her if she was tripping and that bad off; wonder if his car has been checked.