All lovers of horror films have seen many movies based in a camp setting… however once it gets real, and unsolved it gets so much more terrifying!

Summer of 1977 camp scott was getting ready to open, the counselors were there for training several months before camp even started for the summer. During said training counselors experienced their items being ransacked…. and there were doughnuts stolen! Now donuts being stolen doesn’t sound so serious but the empty box was left with a not inside reading: “We are on a mission to kill three girls in tent one.” This… was taken as a prank??? What in the world? I feel like this would be so different now, I hope it would be looked into, taken seriously, but not then… in 1977 this horrifying note was written off completely and the camp continued on in preparation for campers. There are also some rumors who say that there had been intrusions where the counselors were ransacked for the past few years… but they never really let that information out not wanting to scare campers.

Campers flooded the camp, little girl scouts running about ready to learn new life skills. Included in those campers were three girls who would be assigned to tent number 7. Lori Lee Farmer (8), Doris Denise Miller (10), and Michelle Heather Guse (9). Their tent was the farthest from the counselor, not really visible being partially blocked by the showers. A fourth girl was supposed to be in this tent with them, Johnna Wright was assigned to that same tent, but didnt’ feel comfortable upon seeing it and she got herself re-assigned to another tent. 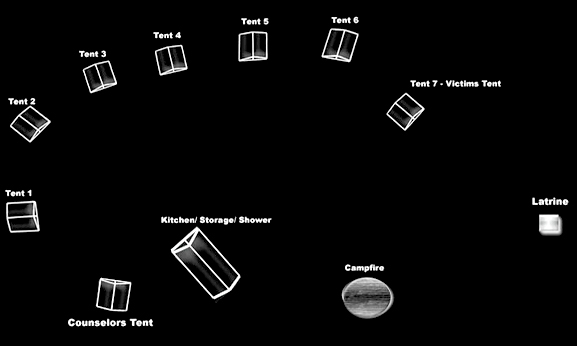 The evening of Sunday June 12, 1977 there was a storm coming in and the girls were all sent to their tents to keep indoors from the storm, I assume they used free time to write home, girl talk, and just enjoy the innocence of being a kid.

Six AM the next morning, a counselor decided to hit the showers and on her way there she saw a sleeping bag on the trail… and it wasn’t empty. Upon further investigation (not just by the counselor who went and got help pretty quickly) the bodies of all three girls were found, about 150 yards from their tent on the shower trail, the girls had been raped, beaten, and strangled. A large red flashlight was found… it had a fingerprint but it wasn’t ever matched to anyone. There was also a shoe print left by a size 9.5 shoe.

The camp was evacuated and shut down.

Semen was found on a pillowcase, however the results of the test were inconclusive as to who it came from.

10 days after the murders there was evidence linked to the crime found in a cave three miles from the camp. Included in the evidence were items stolen from the counselors.

Suspects: Gene Leroy Hart (November 27, 1943- June 4, 1979). Gene was convicted of kidnapping and raping two pregnant women, as well as four counts of 1st degree burglary and was sentenced to jail. However he escaped in 1973 and was on the run at the time of the girls murder.On a tip he was caught again on April 6, 1978. He was acquitted of the crime but did go back to jail for previously committed crimes where he died in 1979.

A Reverend in 1989 said that four men might be involved in the crime and he gave the officers some names, though nothing ever seemed to come from it.

This site uses Akismet to reduce spam. Learn how your comment data is processed.